We are open from 9am to 7:30pm
Interest rates
In this weeks 'MediFinancial - Financial & Lending News' we look at Mortgage Interest Rates over the last 4 months, how they have changed, what this means for buyers, and we make a prediction on what we think will happen in the next 4 months.

Mortgage rates are plummeting as lenders battle it out for a spot on the best buy tables, pushing rates to a record low. We are seeing a massive change in longer term (5-10year) fixed rate loans they have continued to drop and now could be the ideal time to take up one of these offers.

HOW THEY'VE CHANGED
Since October 2014, interest rates for Mortgages have been decreasing month-on-month, in some cases dramatically. 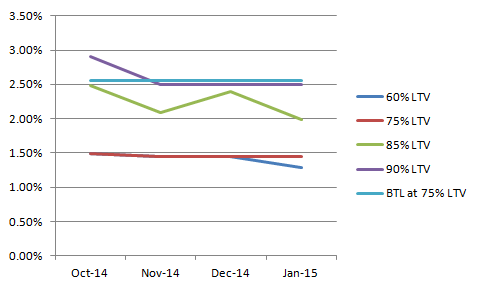 WHAT THIS MEANS
For all buyers, these percentage decreases can be seen as a postivie thing. With more people now in the position to buy a house, this creates a great opportunity to increase the number of Home-Owners in the UK. In February 2014, it was reported that the UK had hit a 25-year low in Home Owners. More than a third of England's 14.3 million Home Owners are now aged 65 and over, with young people aledged to have been frozen off the property ladder. Just 1.4 million Home Owners are aged between 25 and 34, and the number of homes lived in by owner-occupiers has fallen from 71% in 2003 to 65.2% last year, the lowest level since 1987.

However, with the recent improvement in rates, we can expect 2015 to see the number of Home Owners increasing back to the numbers shown in 2003 - and more younger people and families being able to join the property ladder.

Additionally, with rates being record-low, especially for large deposit cases, this means that more people are given the oppportunity to upgrade their property or move to a different location.

RATES FORECAST
We envisage that the next 4 months will show interest rates continue to decrease slightly. However, with election coming up in Summer and the unpredictability of the economic climate, it may be in people's best interest to look at investing in property now with the rates as they are.
Posted by: Anne Barker on 15 Dec 2014